Nanoparticles Functionalized with Venom-Derived Peptides and Toxins for Pharmaceutical Applications


Venom-derived peptides display diverse biological and pharmacological activities, making them useful in drug discovery platforms and for a wide range of applications in medicine and pharmaceutical biotechnology. Due to their target specificities, venom peptides have the potential to be developed into biopharmaceuticals to treat various health conditions such as diabetes mellitus, hypertension, and chronic pain. Despite the high potential for drug development, several limitations preclude the direct use of peptides as therapeutics and hamper the process of converting venom peptides into pharmaceuticals. These limitations include, for instance, chemical instability, poor oral absorption, short halflife, and off-target cytotoxicity. One strategy to overcome these disadvantages relies on the formulation of bioactive peptides with nanocarriers. A range of biocompatible materials are now available that can serve as nanocarriers and can improve the bioavailability of therapeutic and venom-derived peptides for clinical and diagnostic application. Examples of isolated venom peptides and crude animal venoms that have been encapsulated and formulated with different types of nanomaterials with promising results are increasingly reported. Based on the current data, a wealth of information can be collected regarding the utilization of nanocarriers to encapsulate venom peptides and render them bioavailable for pharmaceutical use. Overall, nanomaterials arise as essential components in the preparation of biopharmaceuticals that are based on biological and pharmacological active venom-derived peptides. 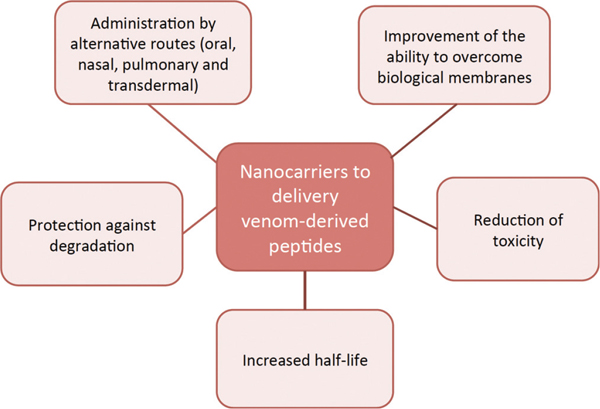