Background: Antifungal cyclic lipopeptides, bioactive metabolites produced by many species of the genus Bacillus, are promising alternatives to synthetic fungicides and antibiotics for the biocontrol of human pathogenic fungi. In a previous study, the co- production of five antifungal lipopeptides homologues (designated as AF1, AF2, AF3, AF4 and AF5) by the producer strain Bacillus subtilis RLID 12.1 using unoptimized medium was reported; though the two homologues AF3 and AF5 differed by 14 Da and in fatty acid chain length were found effective in antifungal action, the production/ yield rate of these two lipopeptides determined by High-Performance Liquid Chromatography was less in the unoptimized media.

Methods: In this study, the production/yield enhancement of the two compounds AF3 and AF5 was specifically targeted. Following the statistical optimization (Plackett-Burman and Box-Behnken designs) of media formulation, temperature and growth conditions, the production of AF3 and AF5 was improved by about 25.8- and 7.4-folds, respectively under static conditions. Results: To boost the production of these two homologous lipopeptides in the optimized media, heat-inactivated Candida albicans cells were used as a supplement resulting in 34- and 14-fold increase of AF3 and AF5, respectively. Four clinical Candida auris isolates had AF3 and AF5 MICs (100 % inhibition) ranging between 4 and 16 μg/ml indicating the lipopeptide’s clinical potential. To determine the in vitro pharmacodynamic potential of AF3 and AF5, time-kill assays were conducted which showed that AF3 (at 4X and 8X concentrations) at 48h exhibited mean log reductions of 2.31 and 3.14 CFU/ml of C. albicans SC 5314, respectively whereas AF5 at 8X concentration showed a mean log reduction of 2.14 CFU/ml. Conclusion: With the increasing threat of multidrug-resistant yeasts and fungi, these antifungal lipopeptides produced by optimized method promise to aid in the development of novel antifungal that targets disease-causing fungi with improved efficacy. 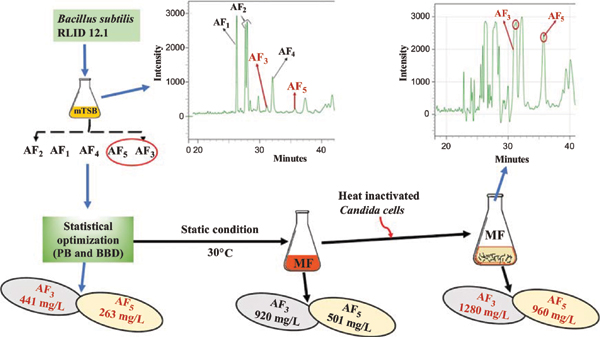