Background: Semaphorin 3F (SEMA3F) plays a substantial role in carcinogenesis, because of its role in inducing angiogenesis, and creating a microenvironment for the developing tumor.

Objective: The purpose of this work was to assess the impact of cisplatin, depending on the concentration and exposure time on the expression pattern of SEMA3F in an endometrial cancer cell line.

Materials and Methods: Cultures of the Ishikawa endometrial cancer cells were incubated with cisplatin with the following concentrations: 2.5μM; 5μM; and 10μM and for the following periods of time: 12; 24; and 48 hours. Cells not incubated with the drug constituted the control in the experiment. To determine the effect of cisplatin on the expression of SEMA3F, the real-time quantitative reverse transcription reaction (RtqPCR; mRNA) was used, as well as the ELISA assay (protein). The statistical analysis was done with the admission of p<0.05.

Results: The silencing of SEMA3F expression on the transcriptome and proteome levels in a culture unexposed to the effects of cisplatin in comparison to endometrial cancer cells under the influence of cisplatin (p<0.05) were noted. Along with an increase in the concentration of the drug used, the number of copies of the gene transcript, during the shortest incubation period had a gradual increase. Only for the highest concentration of the drug, substantial statistical differences in the expression of the SEMA3F protein between 24 and 48 hour incubation periods (p<0.05) were determined.

Conclusion: Using cisplatin in an endometrial cancer cell culture results in an increased expression of SEMA3F, which advantageously affects the normalization of the neoplastic angiogenic process and lowers the proliferation of the cells making up the mass of the tumor. 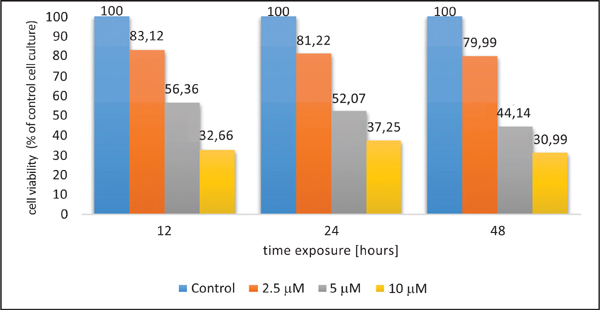