Background: The first immunosuppressive drug - cyclosporine A (CsA) has many unquestioned merits in maintaining organ transplants in patients, as well as, in the treatment of many inflammatory diseases, also associated with cutaneous manifestations. The main task of this drug is to suppress the inflammatory response at the sites of action, which is not well known.

Objective: The objective of this study was to evaluate the influence of CsA in therapeutic concentration on the expression of genes associated with the inflammatory response pathway in normal human dermal fibroblasts (NHDF; CC-2511), and this study attempted to determine the mechanism of its action.

Results: Among the 5,300 mRNA, only 573 were changed significantly in response to CsA compared to the control fibroblasts (P≤0.05). CsA inhibited the expression of most genes associated with the inflammatory response in NHDFs. There were only 19 genes with a fold change (FC) lower than -2.0, among which EGR1, FOS, PBK, CDK1 and TOP2A had the lowest expression, as did CXCL2 which can directly impact inflammation. Furthermore, ZNF451 was strongly induced, and COL1A1, COL3A1, IL33, TNFRSFs were weakly up-regulated (FC lower than 2.0).

Conclusion: The CsA in therapeutic concentration influences the genes linked to the inflammatory response (in the transcriptional level) in human dermal fibroblasts. The findings suggest that the potential mechanism of CsA action in this concentration and on these genes can be associated with a profibrotic and proapoptotic, and genotoxic effects. 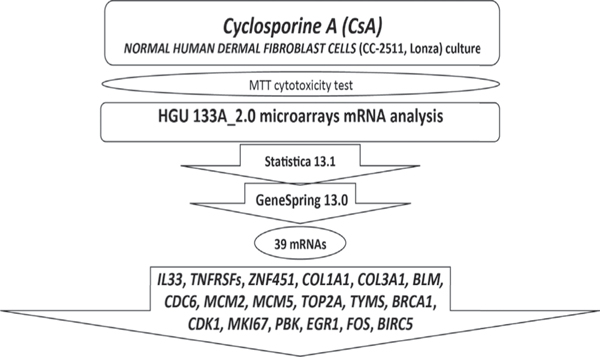