Background: Salinomycin is part of a group of ionophore antibiotics characterized by an activity towards tumor cells. To this day, the mechanism through which salinomycin induces their apoptosis is not fully known yet. The goal of this study was to assess the expression pattern of genes and the proteins coded by them connected with the process of programmed cell death in an endometrial cancer cell Ishikawa culture exposed to salinomycin and compared to the control.

Materials and Methods: Analysis of the effect of salinomycin on Ishikawa endometrial cancer cells (ECACC 99040201) included a cytotoxicity MTT test (with a concentration range of 0.1-100 μM), assessment of the induction of apoptosis and necrosis by salinomycin at a concentration of 1 μM as well the assessment of the expression of the genes chosen in the microarray experiment (microarray HG-U 133A_2) and the proteins coded by them connected with apoptosis (RTqPCR, ELISA assay). The statistical significance level for all analyses carried out as part of this study was p<0.05.

Results: It was observed that salinomycin causes the death of about 50% of cells treated by it (50.74±0.80% of all cells) at a concentration of 1μM. The decrease in the number of living cells was determined directly after treatment of the cells with the drug (time 0). The average percent of late apoptotic cells was 1.65±0.24% and 0.57±0.01% for necrotic cells throughout the entire observation period.

Conclusion: The analysis carried out indicated that salinomycin, at a concentration of 1 μM, stopped the proliferation of 50% of endometrial cancer cells, mainly by inducing the apoptotic process of the cells. The molecular exponent of the induction of programmed cell death was an observed increase in the transcriptional activity of pro-apoptotic genes: Bax;p53;FASL and a decrease in the expression of anti-apoptotic genes: BCL2L2; BIRC5. 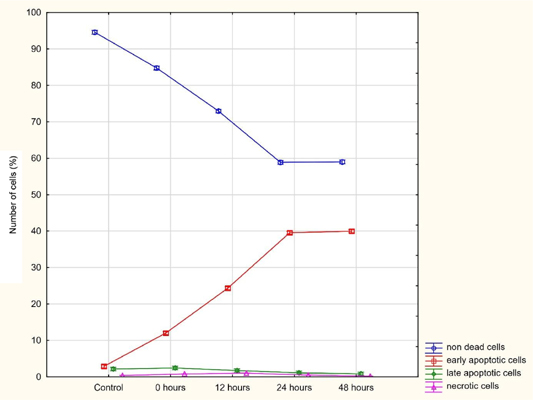