Background: It is important to understand the molecular mechanisms involved in cancer drug resistance and to study the activity of new drugs, e.g. salinomycin.

Objective: The purpose of the study was to analyze changes in the expression of genes associated with drug resistance in the Ishikawa endometrial cancer cell line when treated with salinomycin. In addition, changes in the level of miRNA potentially regulating these mRNAs were evaluated.

Materials and Methods: Endometrial cancer cells were treated with 1 μM of salinomycin for 12, 24 and 48 hours periods. Untreated cells were a control culture. The molecular analysis consists of mRNA and miRNA microarray analysis and the RTqPCR technique.

Results: The following was observed about the number of mRNAs differentiating the cell culture exposed to the drug compared to a control culture: H-12 vs. C - 9 mRNAs, H_24 vs. C - 6 mRNAs, and H_48 vs. C - 1 mRNA. It was noted that 4 of the 9 differentiating mRNAs were characteristic for 12 hours of exposure to salinomycin and they correspond to the following genes: TUFT1, ABCB1, MTMR11, and MX2. After 24 hours, 2 mRNAs were characteristic for this time of incubation cells with salinomycin: TUFT1 and MYD88 and after 48 hours, SLC30A5 could also be observed.

Conclusion: Salinomycin induces changes in the activity of mRNA and miRNA participating in drug resistance; however, the observed changes in character are the expected result of anti-cancer treatment. 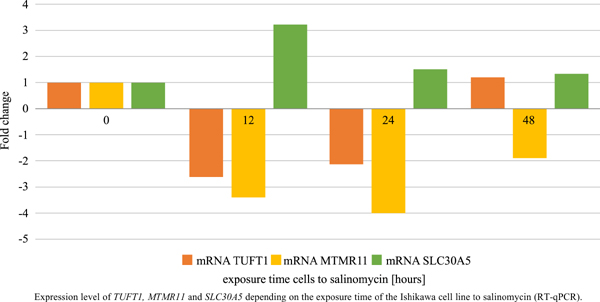