Background: Artemisia absinthium L is an ornamental plant widespread in Saudi Arabia. Traditionally, the plant has been used in the Arabic medicine. But the scientific evidence of the bioactive compounds and their medicinal value was not yet explored widely.

Objective: The study was designed to analyse the bioactive principles and medicinal properties of Artemisia absinthium L, a traditional herb grown in southern part of Saudi Arabia.

Methods: The bioactive compounds present in Hot Methanolic Extract of the Leaves (HMEL) of Artemisia absinthium L. was explored by GC-MS analysis. The cytotoxicity effect of HMEL was determined against MCF-7 breast cancer cells ATCC and human colon cancer cells HCT 116 ATCC by performing MTT assay. Morphological changes of HMEL treated MCF-7 were observed under a phasecontrast microscope by staining the cells with neutral red. A Reaction Mixture (RM) of HMEL was prepared in Milli-Q water and antibacterial susceptibility was performed against both Gram-positive and Gram-negative bacteria. Furthermore, in vivo wound healing properties of the RM was screened in male rats and their efficacy was compared with standard povidone iodine cream. Biomarkers such as IL-1β, IL- 6, TNF- α, caspase-9 and caspase-3 levels were determined to qualify the wound healing property.

Conclusion: The study suggested that novel anticancer, antibacterial and immune modulatory molecules can be developed from the leaves of Artemisia absinthium L. 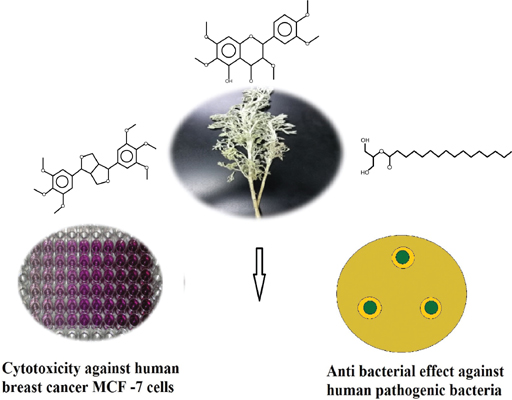